Toyota seeks to sell Prius as stylish and sporty, starting with the Super Bowl 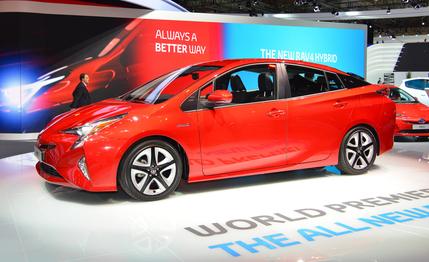 NEW YORK – It is not easy being green, particularly when gas is cheap.

With American drivers deep in the throes of SUV fever, Toyota’s Prius, the standard-bearer of auto efficiency for almost 20 years, is in trouble. Not only are sales plummeting, but the little hybrid is losing market share among green vehicles as Tesla ramps up production and more mainstream brands crank out hybrids.

As Toyota sees it, the solution is sex appeal. Starting with a commercial in Sunday’s Super Bowl, the Japanese giant is launching a massive marketing campaign to convince American drivers that the Prius is stylish and sporty, not just efficient and responsible.

“It is a big leap,” said Jack Hollis, Toyota’s vice president of marketing. “Prius was an environmental icon. It really launched an entire segment. … This takes all of that and adds the two pieces the buying public really rejected: the style and the performance.”

The company went all in on the Super Bowl, buying a 90-second spot that will air when just two minutes remain in the first half, arguably the most coveted slot of the broadcast.

The automaker and Saatchi & Saatchi, its creative agency, aren’t streaming the ad in advance and are tight-lipped about what to expect. They promise the spot will be both dramatic and funny (sort of like an action movie) while poking plenty of fun at the earnestness that has enveloped the Prius to date.

Schragger said the company will know in about six months whether the strategy worked.

At the moment, it seems, anything could help. In the past three years, almost one-quarter of U.S. Prius buyers disappeared; 2015 sales topped out at 185,000. It takes Ford Motors less than three months to sell that many pickups.

Even compared with ultra-efficient cars, Prius is slipping. In the past five years, the model’s market share among alternative drive-train vehicles fell from 41 percent to 29 percent, according to Bloomberg Intelligence. The popularity of sportier models such as Tesla’s sedans and BMW’s i3 precipitated that skid. And for those who care more about price than performance, there are plenty of other options, starting with Chevrolet’s Volt and Nissan’s Leaf. In 2009, none of those cars was on the market. Last year, Americans bought 72,400 of them despite swooning fuel prices.

Toyota admits that the timing for its Prius push isn’t great, but the company wanted to do something big for the big game. “Would I rather have gas at a higher price when I launch Prius? Yes,” Hollis said. “But I’m actually excited about it. … This product will stand out.”

Then there is the car itself. The 2016 Prius — the car’s fourth iteration — is just now showing up in dealerships. It is a far cry from the bloated teardrop we have seen since 1997. When the company tested unbadged versions in Japan, people had trouble even recognizing them as Priuses, according to Hollis.

Most notably, the car has standard and wickedly slanted LED headlights, a direct descendant from the sports cars cranked out by Toyota’s Lexus brand. The once-swollen body is rippled with creases that make the whole package less like a pudgy guppy and more like an angry lizard.

Under the body panels are some major changes, too. Toyota is using an entirely new platform that is far stiffer than that of the older iteration. The suspension is finally serious; the rear wheels will swallow potholes independently for the first time.

The car is both lighter and greener than ever. Thanks to a much-improved battery, mileage improves by about 10 percent. Engineers also moved the power pack forward from the trunk, tucking it under the back seat for better weight distribution in the corners.

Motor Trend has even said the new Prius does a passable impression of a sports car.

In the evolution of high-tech products, Toyota’s shift toward a sportier Prius makes a lot of sense. Breakout gadgets typically tend to look fairly radical, in hopes of standing out and signaling to consumers, “This is a game-changer!” Picture the giant displays and digital numbers on early smartwatches and fitness trackers. From this perspective, the polarizing look of the Prius was an asset in the early days.

Once a technology has been accepted, later iterations tend to blend in. These days, fitness trackers look like simple bracelets or even rings. From this perspective, the Prius overhaul may be overdue.

There is always danger that the new car — and its marketing campaign — will alienate Prius’ dwindling, albeit devoted, base. If Prius loses its credibility with socially conscious consumers and doesn’t win enough business from mainstream drivers, it could stall entirely, according to Erich Joachimsthaler, chief executive officer of Vivaldi Partners Group, a strategic consultancy that often works with automakers.

“Prius is prototypical; it stands for the entire green category,” Joachimsthaler said. “And the more a product stands for the category itself, the harder it is to reposition.”

Toyota sees it differently. According to Hollis, the Prius is so iconic among environmentally sensitive drivers that it no longer has to play the green card; the great mileage and rocket-science aerodynamics are implicit. What it needs is some naughty.